You are here: Home / Archives for retirement plan 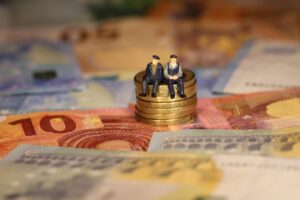 You save for years and years…decades and decades. When you’re saving for retirement, an important consideration to keep in mind when you set your nest egg goal is your retirement costs.

When determining and estimating retirement costs, you need to consider what the average expenses are in general and for the retired folks in your area/state. Once you figure out the generalities, you need to adapt it to your situation.

Some items to consider:

Expect to spend between 55%-80% of current expenses in retirement.

5 Solutions for Managing Money After Retirement

Retiring Out of State

If you’re starting to think about retirement, and your career has largely been in the private sector, your 401(k) balance could be the most important factor in determining whether you’re on track to retire or not.

Whether your 401(k) will cover your spending needs until the end of your life will depend on a lot of factors. It’s important to not just pin your hopes on a certain target for an account balance–a million dollars, two million dollars, whatever–and instead look at the whole picture. So let’s start with a few other questions that are just as important.

There’s almost no way around it: You have to save money to make money. There is often a bit of a free lunch–call it a free appetizer–when it comes to 401(k)s, though: The amount your employer matches your own contributions. It could be a dollar-for-dollar match up to point, or some percentage of what you contribute yourself that increases over time. Either way, you definitely want to contribute at least this amount, or you’re leaving that free appetizer on the plate.

But that should really only be the beginning of any 401(k) savings plan. Fidelity advises saving 15% of pretax income.  If you’re 30 or 40 years old and haven’t given the issue much thought until now, that number should serve as the minimum you should save.

Get into the habit of increasing your contribution percentage each year. Psychologically speaking, if you never see it hit your paycheck (because it’s going straight to your retirement account), you won’t miss it. Set an annual calendar reminder to increase that contribution, even by a half a percentage point. Between the contribution increases and salary increases, you should be able to put your contributions on a sharp upward trajectory.

What Else have You Got?

Once you have your plan for annually boosting 401(k) savings in place, consider what other sources of income you are counting on at retirement. Social Security is an obvious one. If you’re lucky you might have a pension of some sort. Brokerage accounts, rental property, or the planned sale of some asset like a business should all be taken into account as well–and will almost certainly affect how long you can expect your 401(k) will last.

Another reason not to simply come up with an arbitrary hit-your-number mark: Spending matters. At the risk of stating the obvious, your 401(k) and other investment assets will generally last longer if you plan to sip rather than gulp.

You’ll want to have a very solid grip on your plan’s MPG–that is, your projected spending in retirement–to get an accurate reading. 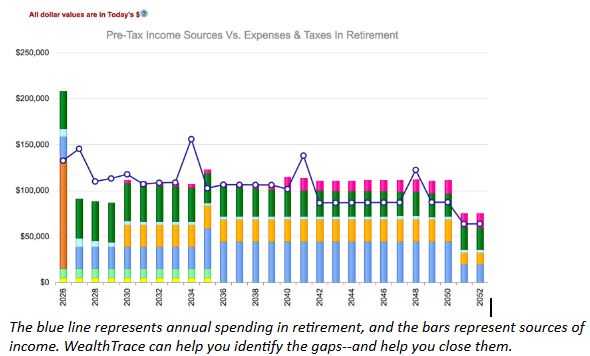 What Is It Costing You?

Even if you are diligent about saving to your 401(k), you probably haven’t considered what the plans might be costing you.

And why would you? The plan administrator’s fees–in addition to the fees paid to the fund companies themselves–are largely out of your control.

But it’s important–especially the further you are from retirement. Fees can really chip away at account balances over time. Consider a 401(k) returning about 7% annually. Here’s what happens if we modify the fees by half a percentage point and assume contributions of $18,000 per year. 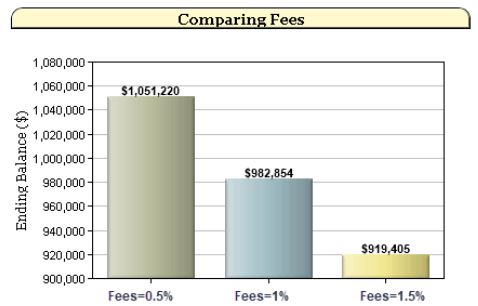 Your main recourse here is to talk to your HR department and start asking questions. What are the fees of running the plan? How do they compare with fees offered by other plan administrators for companies of your size? Making sure the HR team has done their due diligence on this could mean tens of thousands of dollars to you.

A large 401(k) balance could have a big effect on when you can retire and your living standard when you do. But looking at it in the context of everything else we’ve talked about here is more important than an absolute dollar figure. Total savings, where you plan to invest your assets, the cost of those investments, and your spending habits are all complementary forces that will factor into a successful retirement plan.