You are here: Home / Archives for whole life insurance

I’m not a big television watcher, so I’m sorry to say that I don’t see much Dancing with the Stars. I know, you had such high hopes for me. My wife watches the show, so sometimes when I’m playing around on “the Twitter” I’ll sit with her on the sofa. On more than one occasion, I’ve half-witnessed a total breakdown by the “star” because the workouts were too hard. What’s interesting is that these “stars” end up achieving nothing on the show while the harder working pairs continue on. Even if they don’t win, those stars that worked hard talk about how rewarding it was to learn something new.

That’s what we’re going to do today: throw out rules of thumb and learn how insurance works. I am totally an analogy ninja.

He did so well last time, The Other Guy is back to write another scintillating post on insurance. If you missed his last one, you may want to start here: Find the Right Amount of Life Insurance in 10 Minutes.

Everyone wants to use rules of thumb, or “what I heard from my friend” to decide which insurance is best. Why throw a dart when it’s nearly as easy and far more profitable to just do the homework?

I hear experts tell us to always buy term insurance. Or they moan that universal life coverage is a rip-off. I agree that there is one type of insurance that’s best for everyone, but:

The best type depends on what you’re going to use the coverage for and how long you’ll need it. 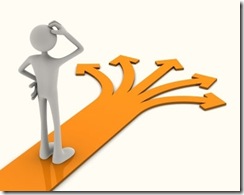 …so before you believe someone telling you that one type of insurance is better than another, minions, know the available types and how they work! Last week I shared a quick formula to determine how much coverage you’ll need. Let’s use another quick method to understand your choices when it comes to life insurance.

Just as a carpenter needs to know the difference between a hammer and a drill, you’ll need to know all the types of insurance to pick the best kind. Don’t worry, I’ll keep it entertaining.

Term Insurance is probably that most well known type of coverage. Because it’s stripped down coverage, it’s often the only type available in workplace plans. Term insurance is nearly as easy to understand as first grade math: you pay for a specific amount of insurance which covers a set amout of time, called a ‘term’.

Helpful example: Barry Manilow purchases a $250,000 10-year term policy. If he dies during the term, Mandy, his beneficiary would receive $250,000 tax free simoleons. If Barry expires one minute after the term ends, the insurance company owes Mandy nothing.

What’s awesome about whole life insurance? Guarantees! If you continue to pay the premium to the insurance company and keep your account in good standing, it’s guaranteed to last. The cash value grows at a guaranteed rate, so you don’t need to worry about interest rate fluctuation much. It’s a wonderful policy type for the super-nervous people of the world.

Universal Life Insurance is a variation on whole life – at some point insurance people said, “Wouldn’t it be cool if the payments to the policy and death benefit could be partially flexible?” Maybe they didn’t ask that exact question, but it makes the point. People who own this insurance pay extra (just like with whole life coverage) to add money to a cash value portion of the policy.

Once enough cash value accumulates, you can sit back and let the cash cover the costs instead of paying more money from your wallet. Many policies allow you to raise or lower the amount of coverage without having to purchase another one.

What’s another key difference between universal life and whole life insurance? Okay, I’ll tell you: universal policy interest rates on cash often float with interest rates. Awesome during 1980 when CDs were paying over 10 percent. Now, though, with the value of savings through the floor, universal policy rates are Coyote Ugly. And no, that’s not code for awesome, like the model-bar.

Variable Universal Life is the newest of the 4 major types. Those crazy insurance companies were getting smoked because the average saver decided to invest money into the financial markets. Marketing people said, pulling their hair out, “what will we do to keep business coming in?” Once again, the phrasing is off, but VUL policies (as they’re known in insurance lingo) were a reaction to the widespread use of mutual funds and other investment tools.

Initially developed in the late 70’s and early 80’s, these types of contracts allow for investment in various stock/bond accounts (similar to mutual funds, but not the same). The major draw of VUL? Flexibility of investments became the name of the game – and the opportunity to have market-like returns right inside your very own life insurance policy. In the go-go 1990’s, this was awesome. Since then, many investors have had middling returns and unpredictable results.

Which is best for the salesman?

In the interest of fair disclosure, I’m going to let you in on a little secret. Life insurance is a BIG commission check…I mean GIGANTIC. You wouldn’t believe how much. Let me give you an example: If you’re a 40-year old man buying a term policy that costs $100/mo; your insurance sales person gets around $850-$900 cash for the first year of your premium payments. Yes, you read that right, you basically pay a year’s worth of premiums to cover the commission amount. I don’t mean to infer that this is bad…it’s just how things operate.

Whole Life, Universal Life, and Variable Universal Life are even bigger payers. I remember receiving a check for over $25,000 for a single $400,000 Variable policy I sold early in my career. I also remember a $70,000 commission check for a $2 million policy. Big money.

My goal isn’t to make you angry. It’s to help you know the broker’s game.

…which brings brings us to the “One Question You Should Ask Before You Buy Anything”:

“Mr. Broker, how much money are you going to make if I buy this insurance?”

I was never ashamed to admit to my clients how much money I’d earn…a good advisor has no reason to be deceptive. But, if he hems and haws…maybe this “complex insurance investment strategy” that sounded pretty cool benefits him more than you. In my opinion, the actual commission is irrelevant – it could be $2 or $20,000, I don’t care – it’s how he answers the question.

All Insurance Types Cost The Same

Sometimes insurance agents will mention that permanent policies, such as universal or whole life, are less expensive than term insurance. I’ll lay it out and let you decide:

Sure, like some margarines are saltier than others, some carriers offer better premiums for smokers, race-car drivers, or 45-year olds. That’s true. However, insurance ‘costs’ among competitors are far closer than you’d initially imagine.

In the above example you’ll see the differences between permanent and term. Notice additional fees (in the right chart, 5 percent is deducted as an additional charge—this fee can be higher or lower depending on the carrier).

Here’s how all insurance costs are similar:

Insurance is sold in $1,000 increments. Imagine pulling up to the insurance store drive thru and ordering 500 $1,000 units of insurance. The cashier calculates the cost based on two factors: your age and the number of $1,000 units you’re purchasing. I hate to disclose this secret: actuarially you’re more likely to die every year you age.

With permanent life insurance, your “cash value” grows over time, reducing the amount of life insurance you buy from the insurance company – which makes it seem like you’re paying less for coverage.

Permanent life insurance is only cheaper because you’re paying extra into cash when you’re young, which lowers the amount you’re buying later on when it’s expensive.

Which Should You Buy?

So…which one is best? Well, that’s a loaded question – but here’s what I think. Start by determining how long you’ll need coverage. For the vast majority of savers, maxing out a Roth IRA and 401(k) plan and buying term insurance is the right answer. If you have a long term need and have a maxed out Roth IRA, 401(k) and you still have money left over…well then maybe a permanent policy may be a better choice.

For this reason, using term insurance for succession planning needs at work or estate liquidity needs to cover estate taxes usually ends in disaster. These policies need to be in-force when you die, so permanent insurance works best.

If you’re a worrier about outliving your insurance and want forced savings, whole life, UL and VUL aren’t the enemy. I’ve had clients purchase permanent insurance only because they wanted security and were comfortable paying a lot of money for it. These policies work, but for a cost.

Because most families need life insurance for a fixed amount of time and have other ways to save money, term is often the best choice.