You are here: Home / irrelevant stories / The Power of Big Fat Audacious Goals

Do you get caught up in living today instead of designing tomorrow?

Snap out of it.

Check out what these two guys accomplished with just a little planning.

As an advisor, I can’t tell you the number of times I heard “but” or “I just can’t.” It was discouraging to watch some people achieve everything they wanted for themselves, while others sat in front of the television, so paralyzed by fear that they never reached anything.

I have a close family member who spends much of the time I’m with her saying, “I wish we could…”, or “Some day I’d like to….” in a really whiny voice. It’s clear that this woman has no intentions of ever turning her “I wish” into “I did.”

Let’s talk about the power of getting what you want.

If you listen to our podcast, you’ll know that last weekend I went with two good friends, Troy and Malcolm, to help them run 100 miles. You read that number correctly. They set out to run a race longer than most would ever dream.

If you read this post and think, “This doesn’t apply to me! I don’t think I’d want to run 100 miles,” you’ve completely missed the point. Go read Disney.com and live in Fantasyland. The point is this: What is it that you want to do? What is your plan to reach that pinnacle?

The course was a 20 mile loop the runners would circle five times. Each loop was a mixture of trails and two-track access roads. Sprinkled around the loops were 3 aid stations, one of which runners would hit twice on their journey. Along with the finish area, runners could stop 5 times each loop for food, water, or first aid.

The day before the race we headed for the pre-event briefing. I was amazed. How many people do you think would try to do something this crazy? There were over 700 runners listening to the rules on littering, race courtesy, and how aid stations worked. Half the runners were signed up for the 100 mile race. Half! The other half? They were going only 50 miles.

Malcolm had finished the 50 miler a year earlier and whispered at the briefing, “This is the only event where you’ll race 50 miles and feel like a total wimp.”

I found out another statistic later: over 200 of the starters wouldn’t finish the trek. 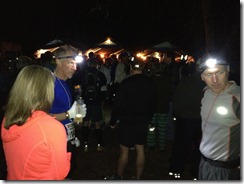 We were at the line early Saturday morning (about 5:30 AM). The 100 race began at 6 AM and the 50 started an hour later. Runners streamed across the campground, nearly all wearing headlamps, and some with a second flashlight in hand. When the starting whistle sounded, imagine people with headlights slowly jogging down the trail. It looked like a stream of fireflies leaving the campground and dancing single file through the woods away from us. 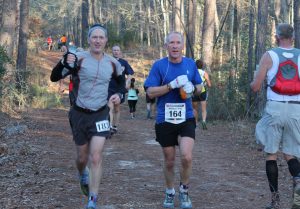 It was amazing to me that, while I went back to my high end hotel (LaQuinta!), caught another hour’s sleep, and edited our podcast, Troy and Malcolm were out there running. I picked up another friend to grab some lunch, and they’d been going for 6 hours and weren’t even halfway done. By the time I reached the campground again at five in the afternoon, they’d still completed less than 60 miles.

All in all, the reports on the runners were good. Malcolm had some trouble with blisters on his feet (he’d popped three) and Troy seemed a little punch drunk. But when they came in after dark to complete their third lap, both still looked to have plenty of energy. 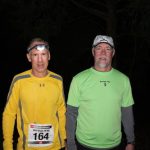 Troy and pacer Barry headed out at 60 miles 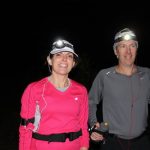 Runners were allowed pacers after 60 miles. Here was the plan: our friend Christy was going to pace Malcolm the entire way, because she was training for her own 50 miler in a few weeks.

What a blast…and a challenge at the same time. Troy and Malcolm, who’d been running together the whole day, didn’t reach the finish line together to start the final lap. Troy was now alone with his pacers. Barry had stayed on to run with Rob and Troy the last 7.5 because there were so many roots that it was too easy to fall in the dark.

I strapped on my light helmet, Barry gave me instructions for pointing out roots and changes in the footing, and we were off. It was midnight. Troy and Malcolm had been running for 18 hours straight.

It became clear to me immediately that running 80 miles had had a huge impact on Troy. He mumbled most of the time, and I tried to tell stories to keep him moving. However, there were so many roots that I spent the majority of my time hunched over each one, making sure he cleared his feet as he shuffle-ran down the path.

After awhile, we found a system rooted in rally racing. I’d watched some of this sport on extreme sports shows. The driver kept his eye on the road while the navigator called out turns and obstacles. I started calling the run like I’d seen on television. I felt like a dork, but here’s what it sounded like,”

Troy was in such bad shape that as we went to leave the aid station at 83 miles, he turned and started walking up the path the way we’d arrived. I turned him around and we were on our way.

Using our new system, we passed quite a few runners. These were the nicest people on earth. A friend joked that it was what you’d imagine Woodstock would have been like if everyone was incredibly physically fit. “Great job, man.” “Keep going, dude.” “Lookin’ good!” were the calls of the day.

There’s a feeling you get when you’re in the middle of the freezing woods at 2 am and suddenly you see the yellow glow of the next aid station. It feels like an oasis. You know that just up the road there will be warm or cold drinks, tons of food, and most of all, a little bit of civilization. Troy would celebrate a little at each one. He’d made it another few miles. 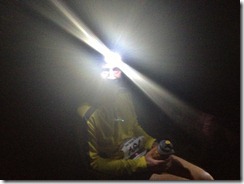 But I knew at the 12.5 aid station that we were going to have a task on our hands. Time was running down and our pace wasn’t fast enough to bring Troy in at his stated goal: 24 hours. While we maintained a positive outlook around Troy, the team seemed pretty negative. At least we’d finish. That’d be a huge accomplishment in itself. In fact, Malcolm was now about 45 minutes behind us, and was clearly trying to finish rather than race to 24 hours.

Because of the roots, I decided to stay on. We’d be a three person team, Christi, Troy and I. I’d run out front and call roots out, while Christi would shine her flashlight on them as we went. After a brief stop, the three of us trudged into the darkness again. Seven miles and just over an hour and a half to go.

Troy was in no position to tell us, but most of the rest of the loop was a clear two-track jeep trail. We made good time, but at the last aid station, with three miles to go, it was clear: we were right on the edge. I could see Troy gathering the little strength he had left to try and make it. The guy could barely stand up and he was still running! It was an incredible human feat.

Throughout the night, we’d been relying on my Nike + system rather than Troy’s GPS to keep track of miles. This tracking, while wildly inaccurate, helped us keep Troy’s spirits up throughout the segments. During the last three miles he must have asked us twenty times, “How much time do we have?” “How far does she (the female voice on my Nike + system) say we have to go?”

Finally I announced, “Troy, she says we’re done.” She’d been early all night, calling miles before we reached them, but the three of us celebrated that moment, and then moments later celebrated again when we crossed what we knew was the last road before the home stretch.

Want to hear more motivational stories from people with big goals? Check out our 2 Guys & Your Money episode with Natalie Sisson (who left New Zealand and travels the world) and Chris Klinke (who climbed Mt. Everest).

I couldn’t believe the change in Troy when we turned the corner and saw the yellow glow of lights across the finishing tent a couple hundred yards away. He let out a war whoop, as did Christi and I. There were echoes of people at the finish whooping back at us. We sounded like animals barking back and forth at each other until he crossed the line.

Malcolm finished in just over 25 hours.

It was an amazing bucket list accomplishment for both of these men. 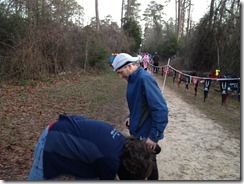 What Does This Have To Do With Your Goals?

1) Set huge goals. While Malcolm finished in 25 hours, instead of his 24 hour goal, he still accomplished something that few will ever do. Don’t set your goals too small. Set them high. Even when you don’t reach them, you still can hold your head high.

2) Set milestones and celebrate. I find people get lost on their way to big goals because they don’t have any markers along the path. Those aid stations were a great oasis to refuel, plan, and then set out. Rather than setting out to accomplish 100 miles, the race became a struggle to reach the next 3 miles.

3) Find qualified friends to help. Troy and Malcolm said that the pacers were a shot in the arm at 60 miles. It became much easier when you had a fresh voice who’d run some serious distances themselves helping you through it. They say you are the people you surround yourself with. Find people who’ve been on your journey. Even if they aren’t going for the same goal, they’ll be able to help you win.

4) Use technology. Sure, the Nike + was innaccurate, but it was close enough that it helped us monitor our progress at any point. Troy and Malcolm still had to run, but without the flashlights, GPS, and suitable clothing, they would have never made it.

5) Stick to a system and work hard. Sure, we got lucky the last 7 miles, but we wouldn’t have been able to learn from that luck if Troy hadn’t worked his ass off to get to that point. My old mentor used to tell me “Work hard and the opportunities will come.” In this case, as nearly always, the opportunity came.

What big goals are you working on? What are you waiting for? Get started!