You are here: Home / Archives for Suing dad for college money

Today in New Jersey an 18 year old is suing her parents for college money. According to USA Today, she says that they issued her an ultimatum (ditch the boyfriend or get out). Dad says they asked her to follow a few house rules.

Whatever. I think this is an awesome exercise.

Partially, I like this lawsuit because I think entertaining me (no matter what it means to the court system) is a great idea. But there are many BETTER reasons:

1) Blaming Someone Else For Your Problems Is Often the Best Solution. This idea of “trying to solve your problems through listening and compromise” is complete baloney. Take a page out of Washington’s book and adopt this slogan: My Way or the Highway.

This plays into any financial decision, doesn’t it? I met with a client during the 2000 market collapse with a young advisor. The client was agitated because the market was collapsing and she wanted someone to blame. The advisor continually tried to reconfirm the strategy that they were using, but the client would hear none of it. “I don’t care what the strategy is. I just want my money back.”

I felt for the woman. Clearly, understanding your strategy is overrated. It isn’t about the world….it’s all about you.

2) Rules Are For Suckers. If you lose money in the stock market you should sue your broker. If McDonalds only gives you one napkin, sue them. I should have sued J Crew for my horrible shopping experience. If your parents won’t pay for college, then tell it to a judge.

I have no sympathy for this guy. Sure, it’s his home, but what about her rights? If she has a boyfriend that dad doesn’t like, why shouldn’t he let her bring him home? In fact, why doesn’t he just pony up for them to live in a hotel? That’s what she SHOULD be suing for….a nice hotel stay. 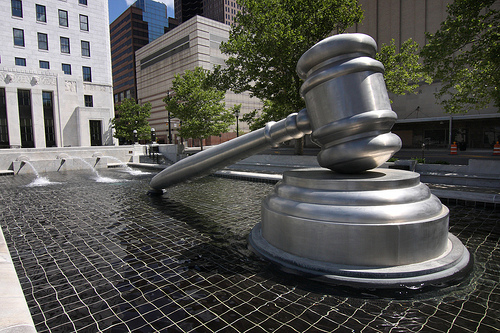 I think the judge should throw this giant gavel at the dad. Teach him a lesson!

3) It’s Not Your Fault You’re Young And Smart. This girl, according to sources, has a $20,000 scholarship and wants to go to school out of state to Vermont. Does it really matter that $20,000 probably doesn’t come close to covering out of state tuition costs? Not to me, it doesn’t. I think she’s completely entitled to whatever education level she desires, if only because she wants it. I don’t care if there are less expensive options. I really don’t care if this is a logical choice at all. If the girl wants it, she should have it.

5) Nobody, AND I MEAN NOBODY, Puts Baby in a Corner.

Do we need more reasons this is a great idea?