You are here: Home / Archives for Boston Marathon

My friend Stacey ran the Boston Marathon a few weeks ago. It was inspirational at best, and depressing at worst. When a good friend accomplishes a big goal while I’m grabbing the next doughnut it can make me feel a little self pity.

For the uninitiated, the Boston Marathon is unlike most others: you have to qualify for the race to even be allowed to enter a lottery to run in the race.

a) be one of the fastest runners in the world; and

b) be lucky enough to get into the race.

I’m a runner. I’ve run five marathons and three half marathons in 400 days (two of the half marathons were the day before a marathon). Sometimes, like today, I’m staring out the window, thinking I should be slugging through another run, but I’m sitting at the keyboard instead. My friend Stacey ran Boston because she wouldn’t have made the same choice. She ran it because there was no doubt in her mind that it was the right thing to do.

Business is the same way. We’re a product of our choices. In my time working with executives it’s been interesting to see what’s successful and what fails. Often, the person wasn’t able to see the failure until it was pointed out to them. It took a coach or good friend, or sometimes a poor review to set them on the right path.

Here are similarities in my mind between running and your career:

I don’t like speed workouts. They don’t feel good. Because of that, I’m often left as the slow guy when the run heats up. It’s the same with business. Early in my career, I’d “wing it” because I was good on my feet. Only

For longer races, I’ll intersperse mellow tunes to actually keep my adrenaline down. In business it’s easy to get on an emotional roller coaster. “Is the customer going to buy? Will they call me back? Is that supplier going to come through?” By keeping your emotions in check you’ll make better decisions instead of the in-the-moment expediting one.

3) Focus on your attack, not on the pain.

When a run gets down to the final miles, it’s painful. I’ve coached enough runners that succumbed to the pain to know: working through pain ain’t easy. Everyone wants to find a way to win, and to do so, you have to be able to control your mental state. Job one: constantly worry about your priorities and overall strategy. This keeps out the pain of the moment.

I often think about cyclists when I’m in the middle of a long, boring workout. My favorite rider in the Tour de France is a guy that many casual fans haven’t heard of named Jens Voigt. The biggest group of riders (called the peleton) ride behind someone who works as a windbreaker. This person sets the tone and pace. The mental and physical exertion of a rider in the front far exceeds that of riders who follow.

Jans Voigt is 40 years old and is often found at the front. He doesn’t win races, he helps others win. Everyone wants Jens on his team because he can ride for long distances pulling the load. 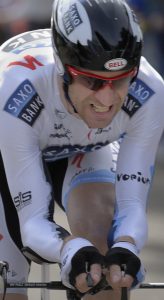 Often in mind-numbing business situations I remember Jens Voigt. I have to pull through the boring parts successfully to get to the satisfying finish. It isn’t the final few steps that matter…it’s those little steps in between that create a championship race. I call those Jens Voigt moments.

I’m not the only one who likes Voigt. Here’s a Wall Street Journal article about why Jens Voigt is a role model for so many: Nobody Suffers Like Jens Voigt.

5) Nutrition is Your Key to Success

In Jim Loehr and Tony Schwartz’s book The Power of Full Engagement: Managing Energy, Not Time, is the Key to High Performance and Personal Renewal, they compare athletes to business people. In a race, you should stretch beforehand, manage your pace so you can finish, and continually feed your body water and nutrients to make it to the end of the marathon.

Why is it that we don’t do the same for business? Why do we think that we can eat a cheeseburger and mess of fries for lunch and perform in the afternoon? Why don’t we stretch out and get the blood pumping before big meetings? We take all of this research that athletes have learned over the years and dump it. Instead, bosses tell workers to sit longer and “get more done.” I’d suggest that those two ideas don’t work well together.