You are here: Home / budget tips / Can’t Save? Write It Out, Bitches!

Okay, I know. The original line in Entourage was “Hug it out, bitches,” but it’s my blog and I’ll twist words for my own devilish devices.

The #1 line people would use in my office back in the day:

It was usually younger people who’d say this, but not always.

I had one solution, every. single. time.:

“Let’s write it out, bitches!” (…minus the bitches part. That wouldn’t have been great for biz.)

Often, just the process of turning thoughts into visuals can quickly uncover opportunities you never knew you had. Your brain has a love affair with visual cues. Many people become jumbled when they hear words, but if you put pictures in front of them, it’s magic. Heck, that’s why Sherlock Holmes has been so popular. Everyone knows that if you just look a little harder, you’ll find the right clues to solve the mystery.

In this case, adding visuals will help us find money where we thought there was none. It’s like the ending of the mystery: The Great “How Did That $10 Bill Get in My Pants Pocket” Caper.

Sherlock Holmes used simple tools around him to solve the crime. Let’s do the same:

So, let’s play around with this mystery on the nifty little Planwise tool on our site.

They are two awesome hypothetical clients of mine. Steve works for Starbucks and earns $2,000 per month. Sarah works as a financial blogger, and (just like the rest of us), is just killing it, making $2,200 per month (inside joke for blogger friends reading this). Both of these numbers represent take-home pay.

Got it? Cool. Let’s interrogate our witnesses.

As clever sleuths, we begin by grilling Steve and Sarah about their savings game plan:

1) They’d like a home. Their little apartment is busting at the seams with four people inside. They’ll need $20,000 minimum for a down payment and mortgage closing expenses.

2) They also know that if they start early, they can get education for their children settled. They don’t want to pay for all of their children’s college, but if they can pay half of an in-state university, they’ll be happy.

3) Finally, they want to retire someday, so they decide to set their sites on age 65.

Why is this relevant, Joe? I thought this was a story about being able to free up money?

It is, but until we know exactly what we’re saving toward, Watson, there’s really no sense. Every crime has a motive. Savings goals also have motives. “Why?” is the best question you can ask yourself.

Sure, it might not be a concrete goal. You might want flexible money for trips or whatever, but there’s gotta be something driving you to change your habits…something to change your life.

Once we have those on paper, we can use them as evidence of why something today should be cut out.

To get an idea of their situation, Steve and Sarah quickly jumped on the Planwise tool on our site. It’s only a matter of minutes to add in expenses and produce a graph like this: 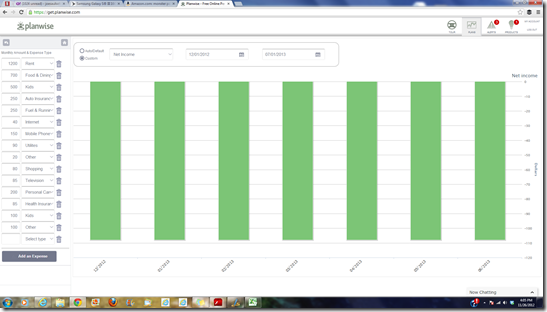 As they expected when they said, “We can’t save,” the Planwise graph shows them in the hole just over $100 per month. Now that we know the situation today, let’s start looking for visual clues.

Example of an unlikely suspect: I could tell them to cut the $90/mo. utility budget. Realistically for a family of four this could get down to $75/mo., but there are easier wins for $15.

Let’s look at those more likely culprits instead:

– $1,200 Rent. If they can find cheaper digs, this could save them huge dollars. I know….this isn’t popular with people, but it’s the biggest expense on the sheet. It should be thrown into question.

– $200 Personal Care. When I’d point to this one, someone in the house would always sigh. For some, giving up their relationship with the hair stylist is like telling grandma you won’t be coming to Thanksgiving. That’s huge money, and can be easily cut.

– $80 Gifts (I’ve called it “shopping” in the Planwise tool). If you aren’t reaching your goals, giving gifts should take the back seat.

How did I find these ones? Generally, they’re bigger numbers. Second, I reasoned what the smallest number could possibly be. By just surveying the list for the biggest numbers and eliminating the ones that can’t be reduced quickly, I came up with a strategy to share with my client.

Sometimes experience helped here (you’d see clients get really creative with their budget), but generally it didn’t. I just learned to look more closely at every number and ask “Why?”

In this scenario, they’re happy cutting gifts back to $25 (kids parties are more difficult to cut than you’d imagine) and eliminate cable tv.

They now have $30 per month in their hot little pockets and a balanced budget, right?

Without goals, the Steve and Sarah’s of the world always choose to cut just enough to get to even.

Unfortunately, they also need savings and adequate insurance. We’ll have to cut more, but not until we find out how much more.

That’s because there’s not a reason for them to save more than they really need. Why continue saving money if there are things they’re cutting now that they’ll enjoy?

See how fun it was writing it out?

Another day we’ll use the Planwise tool to check out Steve & Sarah’s ability to save for a house, education and retirement.

What planning tools do you use to project your savings needs? When looking for money, what you you bitches found by writing it out?