You are here: Home / Feature / Networking 101: Meeting Basketball Industry Insiders (a How Not To Manual)

Let’s take a break from serious planning for a moment and give you some insight into my daily life. Here’s another glimpse into the stumbling life of a guy just trying to fit in. or not.

If you’ve ever wondered how to hob-knob with influential and important people in the basketball world, I’m the most perfect guy to know. Like a battle-scarred veteran, I’ve been there. Not only do I have a long, impressive history of meeting important people, but I must note that I’ve often preferred non-conventional methods to befriend insiders.

This is my story. Feel free to use this method:

As an up-and-coming and remarkably handsome young financial advisor, I recommended my clients complete their estate plan. My highest net worth clients all were entrusted to the work of one attorney. He called one day to ask if I’d like to be his guest with a friend at a Pistons game.

That’s Step One: To fully integrate with the top echelons of society, all you have to do is recommend lots of your friends complete their estate plans. Then, coerce the attorney into inviting you to a sporting event as a thank you. Simple.

We met at the Palace of Auburn Hills entrance. It’s a beautiful venue to watch any event, even from my favorite seats. To disguise myself as not yet wealthy, I generally try to sit three rows or closer to the roof.

John, the attorney, flashed tickets at me and my friend Paul.

John: “You’re going to love these.”

Okay, the strangeness began when we entered the area itself not at the upper level, but the lower deck. This was already new territory for me. I wasn’t sure if I spoke the language or knew the customs down here. Is my foam We’re Number One finger considered classless? Is it okay to yell at the refs from here? What are the traditions in this foreign land? I was a terrified stranger.

Luckily, John took care of the whole thing. He had this practiced “I’ve been here before hand flip.” John really has skillz.

When we arrived at the next rep, about halfway down the lower bowl, she glanced at our tickets and pointed us further down.

If it was a trip to hell I would have been frightened; we were headed to the inner circle.

…we made it to the bottom of the arena, and still another Pistons rep.

He looked our tickets over carefully,then:

Ready? Our seats were folding chairs along the edge of the court.

Now you know Step Three: make sure your lawyer friend has awesome seats to the game.

Preferably know this information ahead of time, but my method seemed to work just fine. Maybe I’m just lucky.

Then, utter disappointment: we weren’t in the front-front row of chairs. No….my loser attorney friend was only able to score second row tickets to the game. You must realize how disappointing this was. Somehow I recovered. At this point, you’re with the who’s who of basketball. Which brings up the next key:

Step Four: bring on the alcohol.

Now, I used beer. You could choose something different, but you have to have enough grease on your vocal wheels to ease into conversations with the who’s who. Alcohol gets a bad rap for “causing health problems,” but I must recommend it to really spice up your trip to the ball game. (Okay, I have to pause for a second. If your sarcasm-meter isn’t working properly, that last paragraph you shouldn’t take literally. Alcohol created the $%#! mess that I’m about to describe, so use your good judgment and drink responsibly – Joe).

During the team warm ups, then-Piston superstar Grant Hill walked onto the court with a new pair of shoes. Instead of a swoosh or stripes down the side, these were white with two blue lines running straight up the spine. They looked like slippers with a racing stripe.

Me: “Check out those shoes. Wow. Is he playing basketball or at home cooking pancakes?” 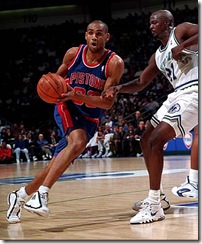 Me: “Beep, beep. Excuse me. My understatement meter is going off. I’m not sure I like ‘em.”

Then I continued to drink beer. I wasn’t driving, and hey, we were sitting courtside.

Here’s another cool perk I never realized. A server comes to your chair and takes your order when you’re sitting courtside. I wasn’t going to have to mix with those foul smelling little people clogging the concourse dippin’ dots stands and popcorn vendors.

This was the life. I’ve never been happier in a folding chair.

At this point, an apology: I find basketball kind of boring. Hopefully the truth is that I don’t understand the intricacies of the sport. I prefer to think that’s the case. It’s better than thinking that my basketball-loving friends are a bunch of morons with nothing better to do.

I wasn’t bored here, though. Between the beer, those cheerleaders, and being able to hear the players talking, I was having a blast. Our seats were about at the free throw line.

Near halftime, Grant Hill even walked over and inbounded the ball right in front of us.

Don’t underestimate the thrill it is to have a real, live NBA player’s butt in your face until you’ve been there. Maybe not a bucket-list moment, but I still get emotional talking about it. I could have pinched Grant Hill’s ass and he would have jumped sky high on television. Hilarity.

Truth be told, I didn’t even consider pinching Grant Hill’s butt. I was too busy looking at his shoes.

Me: “I really don’t know if I like those. Who do you think makes the design decisions at Fila?”

John: “I don’t know, but I think they’re drinking something stronger than beer.”

Step Five – Take the Card When It’s Handed to You

During intermission I was on a role. Shawn Bradley, playing his last year of basketball for the ‘76ers, towered over us.

John: “I never realized how incredibly thin that guy is,”

Me: “He needs to eat the whole box of Wheaties.”

Paul: “My mom’s roast beef would fatten him up. Did wonders for me.”

Me: “I’d love to keep talking about Bradley’s anorexia, but those shoes of Grant Hill are just plain weird. I’m not sure if I like them or not.”

Paul: “Quit worrying about the damned shoes. Eat some of this popcorn. Have you seen the server? We need another beer.”

Paul…always focused. That’s the sign of a true friend.

So, another beer came, and so did the third quarter. The ball rolled out of bounds right next to us. Grant Hill walked over to inbound the ball. It’s amazing how a guy walks right in front of you and never once looks anyone in the face. At the same time, he’s looking like he isn’t really trying to avoid looking you in the face. It’s an art, I’m sure.

But, this time, I wasn’t at all focused on on his facial avoidance ability.

Me: “Okay, I’ve made a decision. I really don’t like the shoes.”

John: “Really? Wow, it only took you three quarters?”

Me: “Yup. Hatin’ the shoes. Just wondering, though. Do you think he gets paid to wear them?”

And that’s when the guy in front of me turned around in his chair, face red with anger. He had a card in his hand and shoved it in my face.

Angry guy: “In fact, he does get paid. Call me some time and I’ll tell you how much.”

I looked at the card. It was the Fila rep in charge of the Fila Hill line of shoes.

You meet all kinds of amazing people at the basketball game.

Fila Dude: “You know what? I don’t care what you think.”

John: (no words–just a shot to my ribs)

Fila Dude: “I’m not trying to be mean.” (Editor’s note: yes he was) “We just don’t really care what middle class white guys in suits think. You aren’t our target market.”

Note: I should have thought of something clever to reply at this point. Had I mentioned some awesome design tips, maybe I’d be working at Fila right now, focused on the task of bringing to market the Fila AverageJoe instead of writing this blog. Call it the fickle wind of fate that I couldn’t find any carefully crafted quip to retort. Or, call it too much beer.