You are here: Home / Cash Reserve / Don’t Be the Emperor With No Emergency Fund

Before we start, minions: Today’s post features a word beginning with “S” AND a reference to horses and pornography. If that bothers you, it might be a good day to check out this website instead.

We all know the old story: emperor surrounds himself with yes men. His posse tells him he’s awesome. Some dude comes along to rip him off and tells him that he’s designing clothes only super brilliant people can see. Emperor is shocked he can’t see the new threads, so he pretends like he can. His homies, not wanting to look stupid, all say “great clothes, dude!” while their favorite ruler runs around buck-naked.

Don’t be that guy.

Two blogs I respect ran pieces about how emergency funds are overrated. While I can see portions of their point, you should think closely before following any advice to ditch your emergency fund.

Sure, interest rates are low and you can garner higher returns elsewhere. Big deal. My life isn’t about squeezing another $10 out of my $5k emergency fund. I’m not staying up at night thinking about how those $%#!ing nickels in my piggy bank are earning 0% when they could be cashing in on October hog futures. (that’s not an endorsement of October hog futures)

No, my life is about avoiding the worry around what the hell I’m gonna do when I’m dragging my muffler behind the car.

I know what I’m gonna do. I’ll attack my fund. I also might just float it on a credit card because it isn’t a big deal.

Then I worry about, “what if I lose my job?”

What an emergency fund accomplishes is nothing short of amazing. A few thousand dollars in the bank can:

– ensure you don’t have to worry when shit hits the fan (and it will…you KNOW it will!).

– allow you to pay off your credit card without stopping the plan (the reserve covers all your emergencies along the way).

– lets you take that hog futures flier with your investment portfolio without having to take your money out before you reach the right time to pull the trigger and giggle all the way to the bank.

The first two points won’t stop the snoring sound from non-believers. Only the last point: investing without having to take the money out, commands the attention of emergency-fund naysayers. 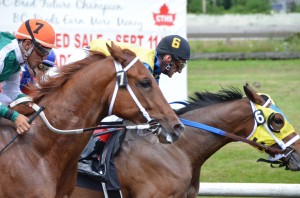 Let’s say Sally decides that the #5 horse in race three is the perfect investment for her money. Screw the emergency fund. Sally wants the big cash payout, not a few Abe Lincolns. Those are for suckers. The race starts and JUST THEN she gets a call from her boss.

The #5 horse is in the middle of the pack. It might win or it might lose. But Sally doesn’t have time to care. She has a mortgage, utility bills, groceries to buy, and it’s all now riding on the #5 horse. She needs that money out of the race NOW!

Oh boy. Sally’s got a problem, and not just with horses and porn…she’s got severe money issues.

Now, if Sally had an emergency reserve, she could have bet the farm on the #5 horse and watched the race in harmony. Sure, she still has some social problems and maybe a gambling habit, but her reserve will carry the day.

Now, you aren’t Sally, you don’t have those issues, and your #5 horse is called a Roth IRA. I hope you understand my parable: where are you going to go for money if you lose your job?

An emergency fund isn’t about the little bit of money in the fund. It’s about the HUGE gains you can make on the money outside the fund if you DON’T HAVE TO TAKE IT OUT AT THE WRONG TIME. Do you want to be a great investor? IF so, here’s your ticket to greatness: Don’t need your money early.

Why “No Emergency Fund” Won’t Fly

Sometimes things sound like a great idea. Clothing that only smart people can see. However, in practice, when you meet hundreds of families, you begin to see all the outliers that might happen out there.

Maybe not. But that’s why people paid me good money…and thanked me when life happened to their goals. People did lose their jobs. Because they had an emergency fund they were able to:

– Build contacts by going to lunch and networking events

– Keep a car to go to interviews

Call me crazy, but when bad stuff happens, I don’t want to have to touch my investments AND I want to be able to do those things.

Worse yet, on one of the two sites (of course, the uber-popular one), the author points to having good credit as a way of avoiding the need for a large emergency fund.

Huh? Let’s think this through:

Let’s say I lost my job. How much does good credit help me? How am I going to make the payments on my debt while I look for another job?

I’ve written before about having nearly no income for twelve months. My good credit at the beginning was shot. If I’d had a six month reserve, I might have been able to squeeze through….I’m not buying the “good credit” argument.

This isn’t meant to rip the two bloggers who wrote on the other side of this topic. Both of those guys know that I have huge respect for their blogs and love their work. I’ll keep reading their advice, because they’re real people with knowledgeable and well researched opinions. If you know who I’m referring to in this post, you should keep reading their blogs, too.

On this issue, though, I think that my public needs to hear my point of view on this subject, and it definitely is on the other side of the fence.

Really, its just that I don’t want you running around naked.

Not for you….for me. Thank you ahead of time.