You are here: Home / Archives for repo man 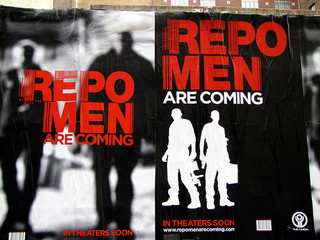 When people ask, “What do you really know about the average guy? You manage money for rich people?” I always smile.  I’ve had the privilege of working through my share of wonderfully challenging personal financial situations.  And when I say “challenging” I mean the worst timing and situation imaginable.

Here’s one you’ll love and can learn from:

I’ve been a member of an entrepreneurial coaching group for a long time. Early in my career I was getting ready to head out of town.  My job was to pick up two additional participants and get the heck on the road since we were getting some pretty crappy winter weather.  As I was just finishing loading my bags in the car, my phone rang:

“Hello, is this TheOtherGuy?” (clearly someone who doesn’t know me. They even pronounced TheOtherGuy incorrectly!)

I answered with the affirmative.

“Hi, this is Rick with American Recovery…”

“Hey, Rick, whatcha trying to recover?” I said, half jokingly…and kinda wondering who this guy was.

“Uh, let’s see here…an Acura.  We need to get that picked up today.”

AT this point I’m sure what’s happening: My wife listens to a radio program in the morning where they call people and get them all riled up and then surprise them with the fact that it’s all a big joke.  I’ve listened a couple of times and have told my wife that there was NO WAY I would ever fall for that stuff.

So, immediately, I thought it was a joke.  So I sort-of played along.

Then Rick says, “So, ’cause you filed bankruptcy, Acura wants the car back.”

Now it’s getting serious…I’m pretty sure I would remember filing bankruptcy.  I assured Rick I had not ever (and would not ever) file for bankruptcy, and that he must have the wrong number.

Then he said the magic words…

Sally is my mom.

And here’s why that matters.  Several years earlier, when I’d bought my nicely used car (doing the right thing…Dave Ramsey would be proud), I decided that I was smarter than the people who figure out interest rates.  I was a young, aggressive financial planner and knew a thing or two about leverage.  So, I figured out that if my MOM co-signed the loan, it would save me another 0.5% per year in interest, thus making it worthwhile for me to take the financing (instead of paying cash for the used car) and invest the difference in some investment that would beat the interest rate.

In fact, I distinctly remember thinking how smart I was.

I figured that I could clear this whole thing up by calling Acura.  You see, it was true. I’d just found out that my mom HAD filed (long story there, but a good reason) and not me!

Without boring everyone with all the details – I have never been treated worse in my whole life.  The people on the phone at Acura actually said “Well, if you weren’t such a deadbeat and wouldn’t have filed bankruptcy, this wouldn’t be going on.”

It really didn’t matter that I HADN’T filed for anything. They kept repeating what a loser I was.

Finally, I ask for solutions – they offer two:

Obviously, I’m choosing option 1, so I inquire: Can I just wire you the money?

Their answer: “No.  It must be Western Union.”

For those of you who don’t know, I found out that day that sending money via Western Union is a giant pain in the ass.  Trust me.

Oh, and did I mention the joys of going to the bank to take a withdrawal of $10,700?  The IRS likes those forms they make you fill out…they’re called Currency Transaction Reports.  And, I happen to know that 100% of CTR’s are reviewed by an IRS Criminal Agent.  Lovely.

All because I was too smart to just pay cash.

So, I went on my trip – worried the whole time that the repo dude was going to take my car while I was 800 miles from home. When I returned, I had to drive 4 hours round trip (since we bank online) to get $10,700 withdrawn from my bank account, then I filed out a CTR which basically invites the IRS over for dinner, I enjoyed standing in line at Walmart for 45 minutes…with TEN THOUSAND DOLLARS IN MY POCKET to fill out this long-ass form to Western Union a payment to Acura.

All because I didn’t pay cash.

…and because I thought I was smarter and could make a couple extra bucks on my own.  I guarantee that the time, energy and stress associated with this incident taught me a lesson – it’s not worth the time.

So, yes, I manage money for rich people…and average people. But many of the lessons I’ve learned are because I’ve also been there myself.

The lesson for today? Pay cash for your car and be done with it.