You are here: Home / Archives for karl slover

I had to tear myself away from the petition to kick the Kardashians off the air long enough to write about a horrible event I just came across online.

This morning I read with much sorrow that Karl Slover, one of the last living munchkins from the The Wizard of Oz, has died at age 93. It says in the article that Mr. Slover enjoyed late-life acclaim at events celebrating the classic film. It’s inspiring that he was nearly as famous at 93 as he’d been when the film was made. He played three different roles and was one of the shortest munchkins at 4-foot 5 inches short. I’m sorry to say that my knowledge of all things “munchkin” is also short. I’ve only been an expert on the awesome round variety down at Dunkin’ Doughnuts (where’s my endorsement, DD…I plug you nearly every $#!@ post).

I DO know a little about their cousins, Oompa Loompas, from the 1971 film Willy Wonka and the Chocolate Factory (NOT that awful Charlie and the Chocolate Factory remake, thank you). Like Mr. Slover changed Dorothy’s life as he and his friends led the girl and her dog down the yellow brick road, Oompa Loompas helped change my world view. I’m not sure I wanted to get close to those creepy monkeys in the Wizard of Oz, but a golden ticket tour of a bad-ass chocolate factory? Sign me up, brother! That’s a world I would have loved to experience,

and some say that I still live in.

Regardless, as I said before: with apologies to Mr. Slover, I’m not an expert on munchkins, but I think Oompa Loompas have a lot to teach us about living.

Let me count the ways:

1) They’re original. Oompa Loompas don’t worry about acting like “ordinary” people. They wear goofy outfits and have horrible hair. Most important: you’ve never seen an Oompa Loompa trying to keep up with the Jones’.

2) They sing all day. How awesome would it be to spend your day singing? Wouldn’t that wipe away your @#$! horrible mood? In my case, people around me would absolutely hate me, but crooning always makes me feel great, even though my vocal cords don’t know a note from a full-on letter. I don’t sing enough. I don’t celebrate enough. It’s time to start singing. 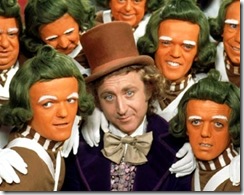 3) They work in an awesome job. We’ve all read the statistics. Most people who are lucky enough to still have a job dislike their work. Baby, if I was making chocolate all day I know two things:  I’d weigh seven-hundred and fifty six pounds AND I’d be giggling every moment I wasn’t singing.

4) They stick close to the visionary. Willie Wonka wouldn’t be the easiest boss to work for, but I’m fairly certain his brain wasn’t focused on charging thirty cents more so they can meet Q2 earnings. He didn’t have time for cover sheets on TPS reports. Nope. Willie was designing a flippin’ elevator into the sky and was intent on finding the right person to carry out his legacy. That’s a guy to have as a friend.

What does this have to do with you? With money?

Money is a fuel for your life. The passing of a munchkin should remind us that we’re only here for a finite amount of time before we’re all off to see the wizard. Forget the dead end job and your next four percent raise. Chuck social climbing and start mountain climbing. See the world. Celebrate. Set goals and use good money habits to claim your own chocolate-fueled adventure.

….and most of all: remember to sing.

Here’s a sales pitch, but it’s for awesome stuff:

Don’t have any of these three classic films? Why not make holiday shopping easy AND support your favorite blog at the same time?