While the COVID-19 pandemic has wreaked havoc on the global remittance industry, a few bright spots are emerging. In particular, developing nations whose economies depend on these money transfers are bucking the otherwise downward trend, including Pakistan, where nearly 40% of the population is living in poverty.

In fact, Imran Khan, Prime Minister of Pakistan, took to Twitter to announce that July was a record month for remittances in the country, which helped to bolster an otherwise ailing economy. Overseas remittances into Pakistan surpassed $2.7 billion in July, the highest level ever, up 12.2% month-over-month and up 36.5% vs. year-ago levels. The State Bank of Pakistan (SBP), Pakistan’s central bank, characterized the results as “encouraging,” attributing the increase to several factors.

Pakistan is in a unique geographical position, serving what the UN’s International Organization for Migration describes as a “bridge between the great civilizations of Asia and Europe.” As a result, it is “country of origin, transit, and destination for international migration flows,” though emigration is a stronger trend, with many Pakistanis flocking to Europe on risky journeys in search of a better life.

The flow of remittances in July 2020 was not centralized in any one country and instead was spread across the Eastern and Western hemispheres. Pakistani migrant workers living in Saudi Arabia led the charge, followed by the UAE, the UK and the United States. In July, migrants living in –

As of 2017, 6 million Pakistani migrants were spread across the following regions:

The strong remittance flows from the UAE in July 2020 might have been even more robust had so many migrants not returned home near the onset of the pandemic. According to Ghulam Dastgir, Pakistan’s Ambassador to the UAE, quoted on CNBC, the UAE is host to some 1.6 million Pakistanis, tens of thousands of whom have been laid off as a result of the crisis and have consequently returned to their home country.

It is not unusual for Pakistan, which is supported by services like Sharemoney for remittances,  to experience a bump in money transfers this time of year as a result of the Islamic holiday Eid-ul-Adha, but this year’s growth rate was twice as high as normal over the past 10 years. According to the central bank, there were several factors at play.

Among them, the government slashed the threshold for eligible money transfers in half, from $200 to $100, as per the reimbursement of telegraphic transfer (TT) charges scheme. This means remittance transactions can’t fall below $200 or the equivalent in other currencies to participate in the program.

The Pakistani government also made it easier for migrants sending money to the country by providing tax exemptions and other perks in an attempt to incentivize people to use formal banking channels when sending money back home. There has also been a push toward sending funds via digital channels.

The response from the Twitter community, meanwhile, was mixed, with many locals cheering the news and others warning that it is just the calm before the storm. One Twitter member, Zulfiqar Tanoli, on the heels of the June bump in money transfers suggested that fueling the trend of higher remittances was the fact that more transactions were being completed through banks rather than informal channels. Tanoli also warned that many workers were also transferring their “end of service rewards” via banks prior to heading back to their home country, suggesting that the momentum will begin to fall off in the coming months. Others on the Twitter thread echoed this sentiment.

Another user, Ahmed Raja, suggested that the rise in remittances was a result of the government stimulus checks distributed to citizens in Western jurisdictions, including the UK and the United States. For instance, the UK government has offered a GBP 10,000 cash grant to small businesses, which Raja suggests has made its way to the Pakistani diaspora there.

The coronavirus crisis initially gripped Pakistan and its population of more than 200 million amid a crumbling healthcare structure that could not handle the influx of cases early on. Ever since going on a strict lockdown in March, and thereby suppressing the spread of the virus, the Pakistani government defied the World Health Organization’s wishes and eased those restrictions in May, saying that closing the economy would be devastating for the already fragile economy.

Since then, Pakistan has shown a dramatic turnaround in the number of COVID-19 cases and deaths, both of which have fallen more than 80% from their highest point. According to The Wall Street Journal, it could be a result of less than aggressive testing and the benefits of the early lockdown at the start of the crisis. 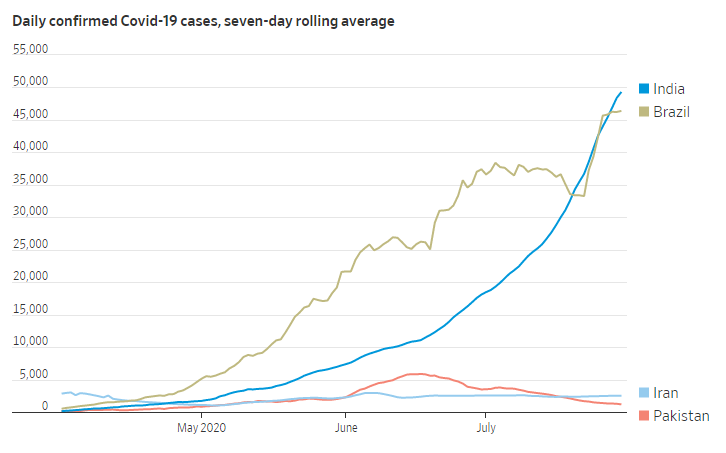 The  rebound in remittance flows to Pakistan could not have come too soon. First of all, money transfers are 6.5% of its economy, according to World Bank data from 2018. Secondly, the flow of foreign direct investments into Pakistan industries including energy and technology has been on the decline, falling to nearly a one-year low to roughly $114 million in July, down 35% from nearly $175 million directed into the country in June.

Despite weak investment in July, the results surpassed weak year-ago levels of just $71.1 million. The economies of the regions that Pakistan relies on for FDI are reeling themselves, including the UK. FDIs into Pakistan are expected to recover in step with the global economic recovery. While the remittance data for August 2020 is not yet available, the results will be going up against last year’s money transfer flows of about $1.7 billion.

BMA Capital issued a report indicating that the robust remittances into Pakistan are not expected to persist but adds that the lower transfer limits will support average monthly money transfers to the tune of USD 1.8 billion-1.9 billion, which should result in better annual results than expected.